(Just a quick note: You can still vote for Be Not Afraid for Best Family Blog until midnight tomorrow! Click here for more details! Thank you so very much for your support!!)

A few weeks ago, I got an idea into my head that I couldn’t let go of. I wanted, no, I needed to re-drive the path from our Washington, D.C. apartment to the hospital emergency room in Virginia that Mike took me to the night I was diagnosed with cancer. With the anniversary of that day approaching, I felt like the only way I could let go of the anger and sadness of how drastically our lives changed that night was by coming full circle, returning to the place where our journey began.

I remember that drive last year like it was yesterday, down to every last detail. I can still see the way the leaves blew ferociously in the evening wind, and I can still hear the song we listened to on repeat as we drove. I remember the way we were silent, lost in our thoughts, both of us wondering what would come of this last-ditch effort to understand the intense pain I’d been feeling for months. I remember pressing down on my left chest, as if my hands held some sort of healing balm that could ease the severe pain I felt. I remember Mike convincing me to go by telling me it would just be a quick trip, and that it surely wasn’t anything serious, although I could see the fear he was trying to hide in his eyes. I remember wondering if the doctors in the emergency room would be mad at me because I’d just had my first glass of Chardonnay in months, in my attempt to relax, though all it did was make my breathing worse. I remember fearing that, like the other countless doctors I’d told about my pain, the emergency doctor would dismiss my complaints as weakness. But most clearly, I remember one specific moment as we drove the winding, wooded road from the District to Virginia–the moment when I suddenly knew in my heart that I wouldn’t be returning home before meeting my son face to face. I didn’t understand why I felt this, or have any more clarity as to what was about to happen, but in my heart, I knew: I was going to meet my baby boy, and much sooner than his expected due date of April 7th.

What happened after Mike and I arrived at INOVA Fair Oaks Emergency room was devastating and life-changing. From the moment I checked in and my blood pressure was found to be alarmingly high and my oxygen level frightenly low, things began to happen quickly. Though the doctor first gave me a simple nebulizer breathing treatment, I think we all knew that imagining it would help was wishful thinking. After it didn’t work, Mike and I convinced the doctor to not to send us away with more questions and confusion, but to keep looking, keep trying to discover what was really going on. After a chest x-ray, things began to go downhill. In a blur, I remember being told that the “good news was” that I “didn’t have a pulmonary embolism,” but that the “bad news” was that I had “a large tumor in my chest that was probably cancer.” I also remember being told to “stop being a baby and act like an adult,” and being left alone in the check-up room minutes after being told my life and the life of my unborn son was in danger, as the doctor yelled at Mike in the hallway, telling him to stop being “such a lawyer,” and to be “more of a husband,” merely because he had been asking the questions he should have, the questions a lovinghusband and father should ask, the questions I would have asked had I not been in tears. I remember having a CT scan, hyperventilating, being given drugs to calm down, and then being wheeled to an ambulance waiting to escort me to a bigger hospital more equipped to “deal with this kind of situation.” By the time Mike and I made it to INOVA Fairfax Hospital, where we were finally given hope, amidst biopsies and the Intensive Care Unit, it had turned to the early morning hours of Valentine’s Day.

That traumatic night is etched in my mind and in my heart forever. And as my cancerversary approached this year, I felt that only by returning to the scene of such fear and sadness could I finally let it go.

And so, on the morning of February 14th, 2012, I packed up plenty of bottles and snacks, toys and diapers, and set off with John Paul to re-create the drive of the evening of February 13th, 2011. Angel that he is, John Paul immediately fell asleep in the back seat, leaving me alone in my thoughts as I navigated my way to our old apartment building in D.C. As I pulled up next to the building, my breath caught in my throat, and tears fell from my eyes. I thanked God for being with me even in that apartment, even in my darkest hours, and begged Him that I never feel such despair and hopelessness again.

From there I drove through the Cleveland Park Zoo and onto the winding, wooded road that leads out of the District and into Virginia. I played the song Mike and I had listened to that night, remembering how it’s chorus of “O God, You are my God, and I will always praise You,” had calmed me.

And this is where my meaningful, emotional trip took a turn for the crazy.

Then, I missed the exit for the highway.

Next, I tried to get off at the following exit to make a u-turn, only to join a line of approximately twenty cars who suddenly began turning around because of the accident that had just occurred on the exit ramp.

For the next forty-five minutes I drove in circles, trying to find my way through the maze of the Northern Virginia highway system, only to find myself continuously re-entering the same (wrong) place on the highway.

Eventually, an hour or so later, John Paul and I wearily made it to INOVA Fair Oaks hospital. By then, I was so frustrated and exhausted that I could only think of my poor, hungry boy in the backseat. I had no meaningful moment as we pulled into the parking lot of the emergency room, and could only give a passing glance to the place where I’d been transported into the ambulance outside. I didn’t have the time or energy to pause and reflect. I had more important things to attend to, a baby to care for.

Later, after John Paul was fed and we’d taken a nice long walk around the parking lot, I began the journey home. And home isn’t that apartment in D.C., for I never returned there. I was returning to our home in Virginia, the place where we’ve struggled through cancer and chemo, yes, but also the place where we’ve made beautiful memories of living and loving. And I had the thought that maybe, when we try too hard to live in the past, we’re given road blocks to remind us that we can never go back, rather, we must only move forward.

For when we focus too much on what is behind,

do we not miss the beauty that is right in front of us? 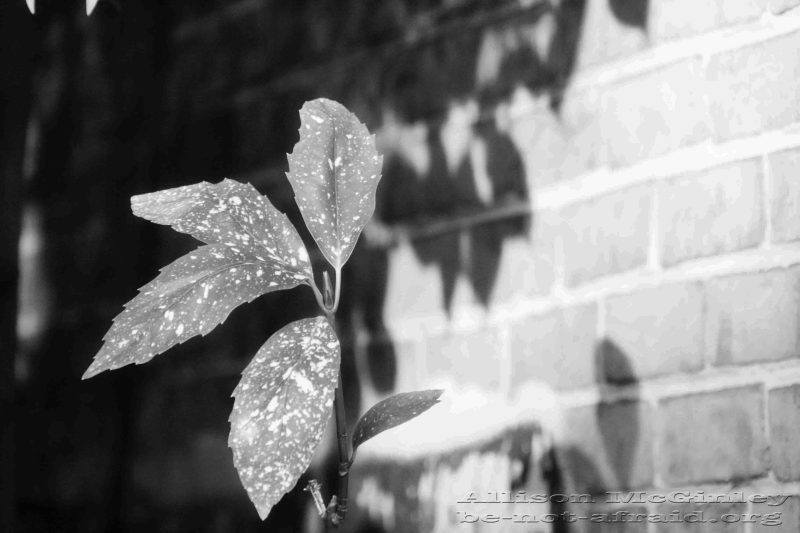 I'm Allison, a stay at home mom to two sweet children, who is constantly seeking joy amidst the pots and pans. I love photography and art, and sell my prints on Etsy @ BeNotAfraidPrints (benotafraidprints.com). I was diagnosed with Stage III cancer when I was 32 weeks pregnant with my first child, and this is where I share that story and how God has worked in incredible, beautiful ways through the suffering.